How does solar panel orientation affect performance in Tasmania? 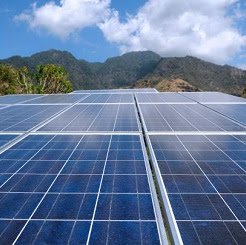 Solar panels work best when they face the sun, but the sun’s position changes with the time of day, and it changes seasonally too. Big solar farms use fancy tracking systems to keep panels facing the sun, but for home systems, it’s best to fix them to your roof. So then how does the slope and orientation of your roof affect the output of your solar panels in Tasmania?

This table gives the answer for Hobart. Read on to learn how to use the table, the general advice that we give as a result, possible exceptions, and how we calculated the numbers. 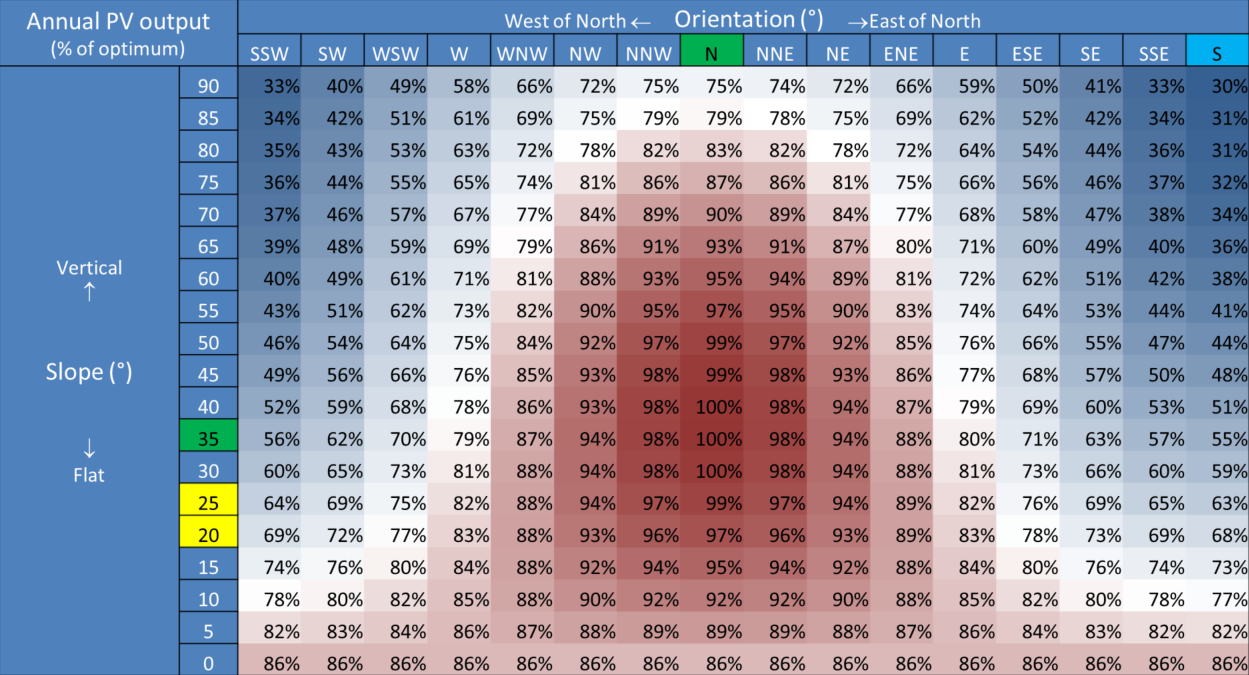 How to read this table

The table has been ‘normalised’ to 100%. The optimum orientation for panels is, of course, due North. The optimum slope of panels (at least in terms of maximising annual solar energy output) is somewhere around 35 degrees up from horizontal. The solar energy output for other orientations and slopes is expressed as a percentage of that optimum. For example, a panel facing due West at 45 degrees slope is expected to generate 76% as much energy of (or 24% less than) the optimal.

Note that most roofs in Tasmania are at a slope of 22.5 degrees. To work out which direction/s your roof faces, you can check Google Maps with the satellite layer turned on (or - the good old fashioned way - use a compass).

Recommendation 1: Mount your panels flat on your roof:

You won’t get much more energy by installing additional racking to tilt solar panels up to the optimum, but it will come at a greater cost, so it’s usually best (from an economic perspective) to mount them flat on your roof.

Recommendation 2: Point your panels as close to North as possible

That might sound like a no-brainer, but there are some interesting cases that warrant closer analysis. For example, let’s say you’ve got a roof line running just off North-South, giving you two roof faces, the first facing sightly North of West (WNW), and the second running slightly South of East (ESE). It may seem sensible to split the panels across both roof faces, as the ESE-facing panels would produce more energy in the morning, and the WNW-facing panels would produce more energy in the afternoon, thereby enabling you to use more of your solar generation onsite rather than exporting it at the lower value feed-in tariff. However, that benefit would be more than counteracted by the reduction in output from the ESE-facing panels (ESE-facing panels produce about 12.5% less energy per year than WNW-facing panels). The difference is fairly minimal in the example above, but is more pronounced for more Southerly roof faces. So, the rule-of-thumb is to point your panels as close to North as possible.

Recommendation 3: If you have two roof faces equally far off North, split your panels across them

A couple of examples here are if your roof faces face E and W, or NE and NW. The panels on the two faces will generate roughly the same energy as each other, but you will benefit by spreading your solar generation more evenly over the course of the day.

The factor most likely to cause exceptions to the above recommendations is shading. If, for example, there is a nearby tree or building that significantly shades your North-facing roof, then you may indeed be better off facing your panels East or West, or splitting your panels across multiple roof faces. There are just too many scenarios here to model and analyse in any useful way, so it’s outside the scope of the modelling exercise we’ve undertaken here.

There could also be a case for installing additional racking to tilt your panels down if installing them on Southerly roof faces. Again, this is not something we included in our modelling.

The most detailed techno-economic modelling for Tasmania ever!

See this blog post for more results and recommendations from our modelling, as well as to learn how we did it.

I’m not in Hobart, what gives?!

Our apologies… We do have detailed meteorological data for other locations around Tasmania and are planning to repeat some of the modelling with that data. Once we do so we will publish the results here. Our impression after running a few scenarios is that while the detailed numbers will be slightly different, the overall recommendations will remain the same.