Run away from the problem

Landfill is currently the main waste management option in Tasmania because, as Mike Richie (MRA Consulting) says, waste is like a river and flows to the cheapest price. With a levy, where you would pay extra (say $100 per tonne) to bury your wastes, people and businesses become motivated to do their best to reduce the amount they send to landfill (and avoid the levy). Consequently recycling, reuse and composting businesses thrive.

Over half of the waste buried in our landfills comes from businesses, like building and retail companies. Most businesses want to do the right thing but they are also economically rational and landfill is the cheapest option because it is highly subsidised by households/ratepayers. They will recycle to the extent limited by cost and return. A waste levy, providing the right price signal to incentivise recycling and diversion, is essential for driving reform. Education and short-term incentives are not enough to create business confidence and investment in the recycling industry, we need structural reform.

The artificially cheap and under-priced landfills in Tasmania have been both economically and environmentally costly because they have created anti-competitive forces in the market, undermining recycling and resource recovery opportunities. Higher landfill prices create the headroom for recyclers to operate competitively (MRA - How to price a landfill). The NSW levy of $133 for example, has stimulated the creation of many new composting, recycling and re-use businesses and only resulted in 1-2% increases in costs to businesses. The recent Tasmanian Waste Review (2014) says that without a waste levy, ‘realistically the Tasmanian community can expect to see only minimalist improvements to waste and recycling’.

According to Mike Richie, MRA Consulting (the font of all knowledge in the waste space), "if we remove structural barriers to reform (i.e. stop providing artificially cheap landfill and stop changing our mind about where compost facilities can and can't go), we can create a sector (a waste recovery sector) that is high wage, drives sustainability, offers green collar jobs, is recession proof and has a high manufacturing turnover producing resources that go back into the productive economy. The future is incredible for this sector, the opportunities are enormous. We have the technology, the skills, the knowledge, what we are missing is the will to change some of the hard things like pricing of landfill, like setting up the right regulatory framework to allow all this to happen".

In other States where levies have been introduced and used to fund recycling infrastructure and education, job creation has been high. And importantly, recycling jobs are green collar jobs and largely recession proof. This is in contrast to our resource-extractive industries, such as mining, which are often seen as being keys to a strong economy. Our mining industries, however, tend to be cyclical, based on commodity prices and currency fluctuations, and inevitably come at a great environmental cost (and rate payer cost) to Tasmania. Recycling is one of the fastest growing manufacturing sectors in Australia but its growth cycle is due to rising environmental controls on landfills and the introduction of landfill pricing signals.

Mike Richie goes on to say metals and cardboard recycling pay for themselves. Other materials are too expensive to recycle and should just be banned or have a mandatory price put on them. For example, plastic bag recycling costs around $4572 per tonne, whereas kerbside recycling only costs $140 per tonne, plastic bags need to have a price put on them to reduce their numbers! What we need to do is focus on diverting the organics from Tasmanian landfills (over 60% of material buried each year) and getting a container deposit scheme in place.

Waste management is the engine room of a sustainable and circular economy - we need reformists, driving change in our local and State Governments. With the amount of waste produced increasing each year, we need to plan for the infrastructure and focus on the right waste streams. We cannot continue to subsidise the costs of operation, overheads, mobile plant and equipment, labour, contamination monitoring, pollution control, depreciation costs of roads and buildings and other fixed assets, the 30-50 year post closure management (e.g. McRobies, long term monitoring and reporting), and importantly replacement of the landfill asset itself. 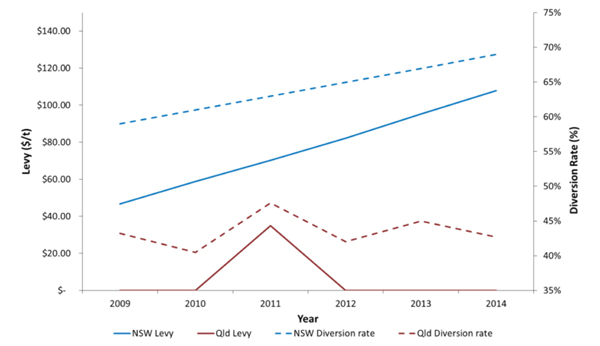 A graph from MRA Consulting (State of Waste 2016) showing how effective levies are at Diverting waste away from landfill. 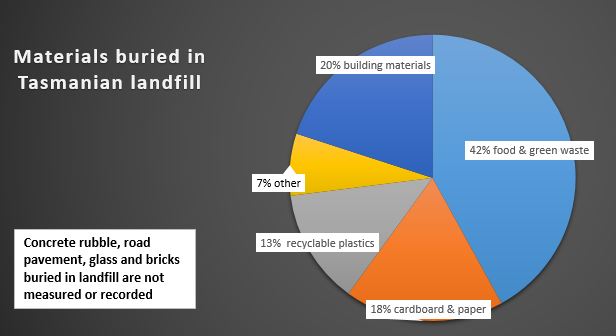 Data from the National Waste Report 2013. 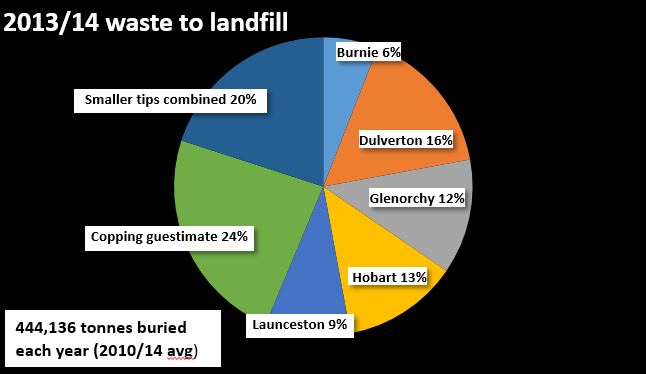 Data found in landfill facility reports (except Copping, who appear not to release their landfill data).

In the end, the idea that we need landfill sites is wrong, waste is a human concept and also a human problem. In nature there is no waste, as every living thing serves a greater purpose than its own lifespan, and contributes to the growth of something else. We just need to rethink the way we do things and not tolerate the production of wastes we can't manage.The costs of not doing so are too high on the billions of people who are going to inherit the results of our decisions and the other plants and animals with whom we share this planet.  In the meantime... we need a levy to begin the changes we want to see.