The ultimate goal of any emissions target should be securing a global climate that supports human flourishing. Decades of scientific research and international negotiations chart the path we should follow to achieve this.

The cumulative amount of greenhouse gases that humanity can emit while retaining a safe climate is referred to as the global 'carbon budget'.

At current rates, we'll exhaust the remaining budget by the end of 2020[v]. It’s clear we’ll overshoot, but by getting to zero emissions quickly and then pulling carbon back out of the atmosphere into soils and plants, it’s still (just) possible to stabilise global temperatures at, or close to, the 1.5 °C target.

Now that we’ve established the global carbon budget, we can attempt to derive Tasmania’s fair share. An obvious approach is to assume equal per capita share from now on:

Tasmania would use this up in less than 10 years at our current rate of emissions of 1.6 MtCO2-e/y[vi]. Under Sustainable Living Tasmania’s proposed pathway (Figure 1 below), cumulative emissions exceed the budget in 2027, peak at 18 MtCO2-e in 2035, come back down to the budget in 2043, and continue falling for the remainder of the century.

The fundamental flaw with the above approach is that the date from which the remaining budget is divvied up is arbitrary, and it has a huge impact on the end result of the calculation. Using 2016 as the start date unfairly ignores past emissions that have been used for economic advantage by some and not others. This principle is well established in international climate treaties.

In Tasmania’s case, an average of 7 MtCO2-e per year was emitted from the Land-Use, Land-Use Change and Forestry (LULUCF) sector in the two decades from 1990. It is now sequestering at about the same rate. It is unreasonable to ignore past emissions from cutting forests while counting future sequestrations as they regrow.

It would be equally unreasonable to set the start date at a time before people were sufficiently aware of the problem, and had mechanisms in place to monitor and manage emissions. Perhaps, then, the most reasonable starting date would be when the United Nations Framework Convention on Climate Change (UNFCCC) entered into force. The objective of this international treaty is the "stabilization of greenhouse gas concentrations in the atmosphere at a level that would prevent dangerous anthropogenic interference with the climate system”[vii]. It was adopted in 14 June 1992, and entered into force on 21 March 1994.

Below the same calculation methodology as above is used with the beginning of 1994 as the start date (when the UNFCCC entered into force):

From 1994, Tasmania used this budget up before the turn of the millennium, and has now used it more than three times over! Even under Sustainable Living Tasmania’s proposed pathway (Figure 1 below), we would remain 2.7 times over the budget at the end of the century.

From the calculations above, it is clear that Tasmania has already blown our fair share of the global carbon budget. The best we can do now is get to net zero emissions as quickly as possible, and then sequester as much as possible. The questions that follow are how quickly, and how much? We believe Tasmania can achieve net zero emissions in 2035 and sequester 65 MtCO2-e from then to the end of the century, while thriving in the process. 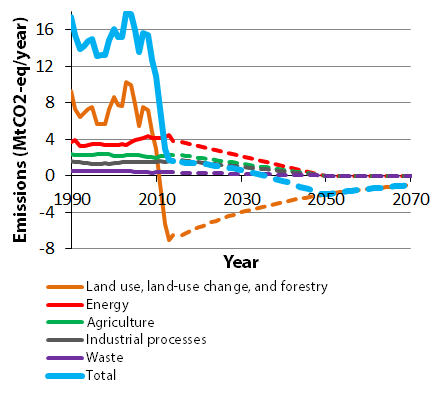 As illustrated in Figure 1, these targets would be achieved if:

As we develop plans, the sectoral emissions trajectories may shift. For example, emissions from the Energy sector may be able to be reduced more rapidly and industrial emissions less rapidly than shown.

That we Tasmanians have used far more than our fair share of the global emissions budget, combined with us being so well placed to do something about it, means we are obligated to do so. With the Climate Solutions project, we aim to plan out what Tasmania can and should do. What's more, we aim to show how Tasmanians can thrive in the process!