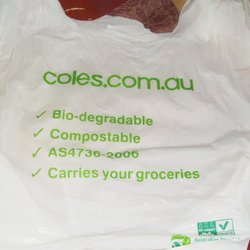 Are they the solution to plastic pollution? Well, they are certainly less bad, but unfortunately they're no silver bullet.

Here "compostable" means the material will disintegrate and biodegrade within in industrial compost conditions, without adversely affecting the composting process or end product. That sounds pretty good, however the most common standard sets a reasonably low bar of 90% biodegradation after 6 months. More importantly, industrial compost conditions almost never occur in nature.

What happens to them in natural environments?

To date there have been surprisingly few scientific studies into what happens to compostable plastics in marine environments.

A recent, peer-reviewed scientific paper (Emadian 2017) includes a table summarising a bunch of past studies on the degradation of various bioplastics in various environments (e.g. compost, soil, sea water, etc). Only a few studies for sea water environments are included...

Note that these tests were done on thin films, which breakdown faster due to high surface area to volume ratio. The table doesn't include any sea water tests for the most commonly used compostable bioplastic, PLA. It does include a number of PLA tests in soil conditions, with results varying from 10% weight loss after 98 days (slowest) to 43% weight loss after 56 days (fastest).


So, it would seem that "compostable" plastics take months, if not years, to biodegrade in natural environments. While this is certainly a lot less bad than the decades to millennia that conventional plastics might take, I'm sure that distinction would be lost on a turtle unfortunate enough to have a gut full of the stuff... The paper, titled Biodegradable plastics and marine litter: misconceptions,concerns and impacts on marine environments, (Kershaw 2015) summarises a very interesting study that explored just that...

Changes in polymer mass were measured over 49 days (standard test procedure) after which weight losses were as follows: HDPE – negligible, oxodegradable – negligible, and biodegradable – 4.5 – 8.5%. This is much slower that the degradation rates claimed by the manufacturers for industrial composting. The study demonstrated that degradation of plastic was much slower than for normal dietary items. The lower rate of degradation in the Loggerhead may be due to differences in diet and associated enzyme activity."

There is a real risk that some people think, "it's compostable, so it doesn't matter if I litter it", which could mean the uptake of compostable plastics results perversely in more litter. This is not well researched, but Kershaw did cite one study that supports this fear:

It's still a waste

Compostable plastics often use less energy to produce than conventional plastics. but they still use a significant amount of energy. They are generally used for single-use applications (as they are designed to breakdown, they aren't well-suited to multiple-use applications). Much better solutions are non-polluting, durable options that can be used again and again, such as jute bags.

Getting them to industrial composting facilities

In Hobart, the plan (not yet implemented) is to allow compostable plastics to be put into the "green waste" wheelie bin that residents already have. These bins are taken to Hobart's industrial composting facility at McRobies Gully.

However, other councils don't have these bins (Launceston does have it as an optional extra), and even in Hobart there are no plans to provide such bins for businesses or in public places (near takeaway shops where a lot of the waste is actually generated).

Compostable plastics will also be put into rubbish bins, which make their way to landfill. This isn't a problem as far as litter goes, but it does mean they'll break down in an oxygen-starved environment, creating methane - a more potent greenhouse gas.

"... the adoption of plastic products labelled as ‘biodegradable’ will not bring about a significant decrease either in the quantity of plastic entering the ocean or the risk of physical and chemical impacts on the marine environment, on the balance of current scientific evidence."

So, if compostable plastics don't cut it, what can you do? Check out our post on plastic pollution and what to do about it.