Bill McKibben - one of the world’s most important global thinkers

Bill McKibben is an author and environmentalist, and most of us know him as a relentless campaigner and co-founder of 350.org, the first grassroots climate change organisation. 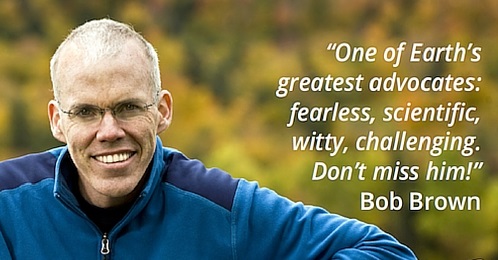 An influential educator for 30 years, Bill was awarded the Right Livelihood Award in 2014. He is coming to Australia from the US this week and will appear at only 2 events - one of which is the annual Hobart Oration.

Bill will be introduced by Christine Milne, former leader of the Greens, and hosted by the Bob Brown Foundation. Delivering the 6th annual Hobart Oration, Bill will give an inspiriting, educational and motivating talk about the hottest year ever, and the hottest battle of our generation. It is so timely considering how climate change is now in our faces in Tasmania and we must take collective action.

The Schumann Distinguished Scholar in Environmental Studies at Middlebury College and a fellow of the American Academy of Arts and Science, he is the 2013 winner of the Gandhi Prize and the Thomas Merton Prize, and holds honorary degrees from 18 colleges and universities. Foreign Policy named him to their inaugural list of the world’s 100 most important global thinkers, and the Boston Globe said he was “probably America’s most important environmentalist.”

His 1989 book The End of Nature is regarded as the first book for a general audience about climate change, and has appeared in 24 languages; he’s gone on to write a dozen more books. Books by Bill McKibben and also books by Bob Brown will be for sale and there will be time for book-signing after the oration.

Tell your friends and bring your family because everyone should hear what he has to say!